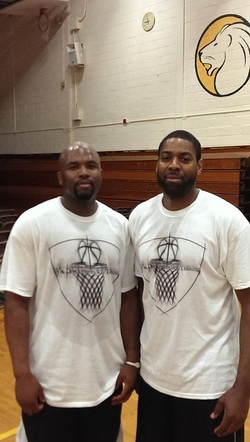 ​Jamar Wise has been involved in basketball as a player, coach and trainer for almost 20 years. In high school he played at Roselle Catholic. He chose to attend Seton Hall University where he played on a team that made the NIT and NCAA tournament and obtained a bachelors degree. He has learned from some of the greatest coaches and trainers in the country and knows what it takes to achieve the highest levels of success. After college Jamar continued to pursue his love for basketball. He has worked with players of all ages and skill levels, from young children to professional NBA players.

Jamar saw a need in the marketplace for personal skill training and embarked on his next basketball venture by starting Wise Basketball Training with EJ Vaughn. Taking all he has learned as player and coach he has transitioned his love and passion for this sport into training some of the most talented up and coming future basketball stars in his community.

Jamar’s skills are favored and respected. His playing and teaching experience make him one of the most qualified and experienced personal skills coaches in the country. He personally knows the amount of work, commitment, and dedication it takes to play on the higher levels of basketball. He takes pride in passing down his knowledge and experience to help others achieve their highest goals. For any player looking to significantly improve their game, an opportunity to train with Jamar is not one to be missed.

EJ Vaughn is a lead trainer with Wise Basketball Training and former assistant men’s basketball coach at Roselle Catholic High School. Coach Vaughn has worked and trained with Jamar Wise for many years and the two share a passion for helping players explore their limitations while encouraging them to step out of their comfort zones.

Since starting his coaching and training career in 2004, Coach Vaughn has mentored and trained hundreds of athletes of different ages, genders and skill levels. He has a unique ability to not only break down the fundamentals of the game, but also an ability to teach them to players of all levels. His expertise as a trainer is rooted in being a true student of the game, and years of playing and coaching players at the highest levels.

Coach Vaughn brings a positive, high energy approach to his training in order to challenge players to reach a new level of performance. He believes that players have to have a willingness to learn and the desire and determination to get better. His training philosophy is founded in the words of Jim Valvano;

“How do you go from where you are to where you want to be?…You have to have a dream, a goal and you have to be willing to work for it.” -Jimmy V
Site powered by Weebly. Managed by College Web Pro